Depending on the news outlet, Dallas has a "skyrocketing" murder rate. Murders “shot up 108%” in July as compared to a year earlier as 529 of us found doom at the hands of a criminal. Out of a population of 1.3 million Dallasites, however, the number is comparatively small. This certainly is not intended to minimize the horror of these crimes. Victims, their families, and friends are all deeply affected. While there are obviously horrible crimes, that garner much attention, there are other crimes committed on a daily basis that never make the news.

While most of us have not been murder victims, it is likely that most of us have been the victim of a burglary, a robbery, an assault or a theft--hence our acronym: "BRAT." It could be argued that these crimes deeply affect everything from our overall safety, to property values, and perhaps even our ability to find affordable food nearby. 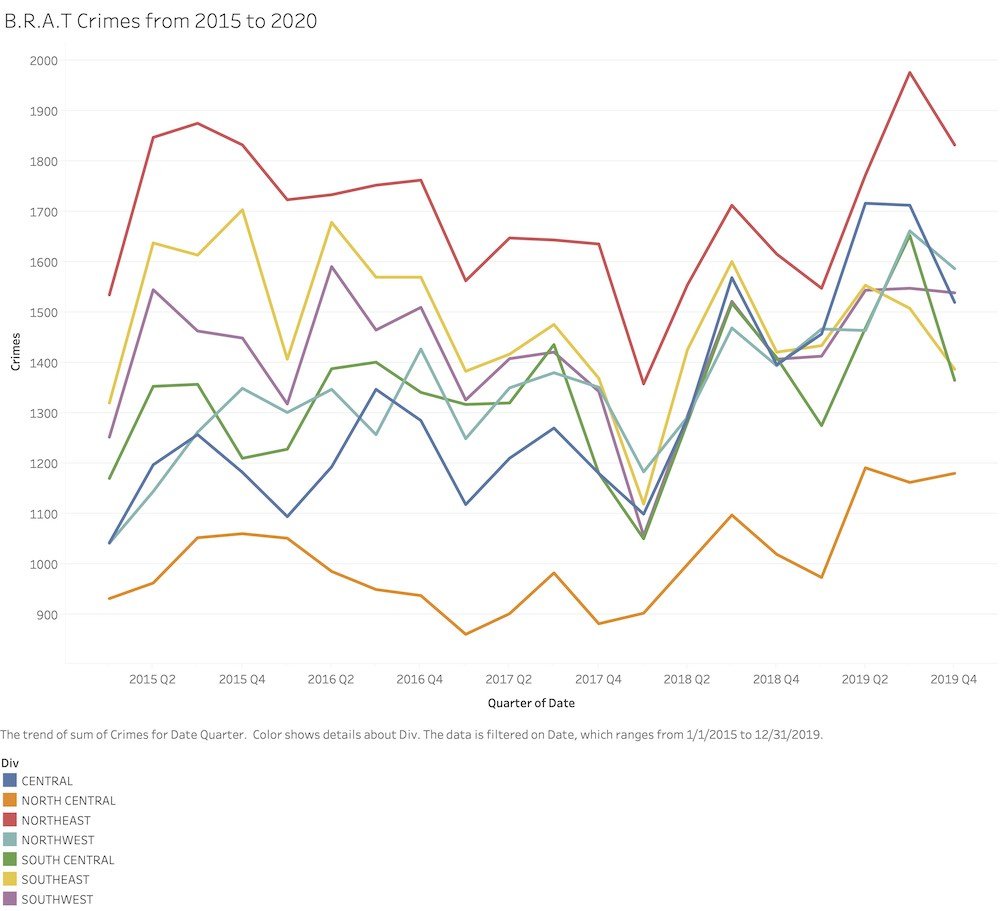 Using publicly-available data, we identified and analyzed just over 225,000 BRAT crimes committed over the course of a five year period from 2015 through 2019. An initial look at the findings might tend to suggest that there has been an initial increase in BRAT crimes, across the board, coinciding with a policy change at the District Attorney's office declining to prosecute certain crimes and release low level offenders. Though the data is probably not yet adequate to predict a trend, and our COVID-19 Spring has likely skewed the trends this year, it is conceivable that Dallas could realize a huge increase in BRAT crimes if the pre-COVID trends continue. We also remind readers of the requisite warning that correlation does not necessarily imply causation. The initial observations obviously call for more research.

Some of the questions we are interested in pursuing include: what impact do BRAT crimes have on the quality of life in Dallas. Could these trends impact the ability of families to find safe, affordable housing? Could they also play a role in denying access to quality food ("food deserts") and retail resources? Again, it is early in the research, but we expect the data to yield interesting observations.

Finally, though we were able to identify around 225,000 BRAT crimes, we believe the actual number to be higher, and potentially significantly higher. We can only include what can be identified and, given the city's rather lax methodology in recording the data, much effort is needed to clean the data.

Ultimately, we hope to provide an application that can provide actual measurements from your location to occurrences of specific categories of BRAT crimes--along with the trends. But that may take a while.

[UPDATE 8/21: The Apartment Tax Visualization Tool is online (see below)]

Just in time for DISD’s record-breaking $3.7 billion dollar bond package, we are putting the final touches on an online tax visualization app for renters. Renters, you say? Yes! Apartment renters are usually unaware of the tax impact on the rent they pay. In fact, renters tend to pay more tax on smaller square footages than homeowners.